Montana is a cornucopia of elaborate terrain; every geologic formation known on the planet can be found in Montana. Extraordinary? Yes, and so is Montana. 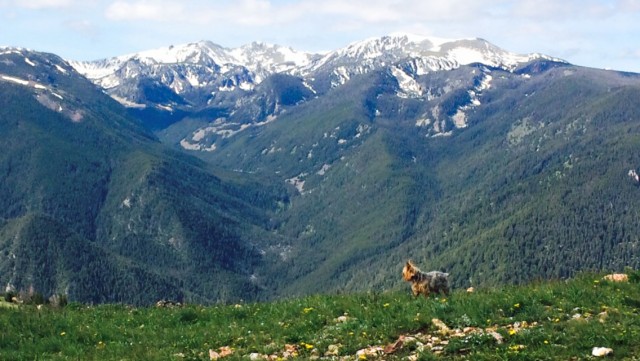 Although the name of Montana is derived from the Spanish word for mountain, only one-third of the state is mountainous. Often described as if it were two states an eastern prairie and a western mountain rangeMontana provides a diverse range of scenery for the traveler. The northern part of Montana borders Canada, Wyoming and much of the south, the east borders North and South Dakota, and Idaho lines the west side with the Bitterroot Mountains. Montana's share of the Rocky Mountains comprises two dozen distinct ranges. The elevations swing from 3,500 feet on valley floors to the peaks of the Beartooth Plateau near Yellowstone National Park that rise above 12,000 feet. The ranges that exist at higher elevations often create their own weather systems, inducing precipitation that supports dense coniferous forests of r, pine, cedar, spruce, and larch. While snow can pile up hundreds of inches, measurable precipitation only ranges from 14 to 23 inches annually. Powder white peaks are often still visible on the hottest days of summer.

The valleys that divide Montanas mountain ranges vary from narrow slots to broad floors up to 50 miles wide. The most unforgettable valleys the Big Hole, Gallatin, Yellowstone, and MaMadison are named after the rivers that drain them. Nearly one-fourth of Montana, 22.5 million acres, is forested. Most of the forests occur west of the Continental Divide, where moist Pacific Coast air and mountainous areas provide favorable conditions for the growth of approximately twenty-seven types of trees.

Eastern Montana, often deemed as monotonous, has a character of its own and is full of its own topographical surprises such as badlands, sandstone outcroppings, glacial lakes, ice caves and even an occasional pine forest or cluster of low mountains. The short grasses that grow in this region support a thriving livestock industry. Out of the wide, endless ranges of grass, a legacy grew from the great trail drives that moved cattle and cowboys from Texas to Montana as early as the 1860s. While the prairie is not known for its trees, the savannahs of eastern Montana grow more than sagebrush. Willows take root in the river valleys while pine and cedars spot the hills. Cottonwoods, once prized for firewood and dugout canoes by many Native American tribes and early settlers, grow near river bottoms, while chokecherries and currants grow on the lower ground.

Nowhere is the contrast between mountains and plains more striking than along the Rocky Mountain Front which some distinguish as the division of eastern and western Montana. The stretch of highway between Augusta and Browning is remarkable. To the west is a solid wall of peaks; to the east lie the unrelenting expanses of plains. Moods and colors are abundant in the tapestry of the wide open Montana sky as it changes daily, even hourly.

Two of the United States most extraordinary national parks frame Montana. On the state's northern edge are the chiseled peaks of Glacier National Park, while along the southern Montana-Wyoming border lies the thermal wonder-world of Yellowstone National Park the oldest national park in the world and largest in the United States. Fire and ice were the artists within Yellowstone, as it was created by a series of volcanic eruptions. These intense geothermalforces are still at work beneath the Earth's shallow crust making Yellowstone Park the largest hotspot on the globe.