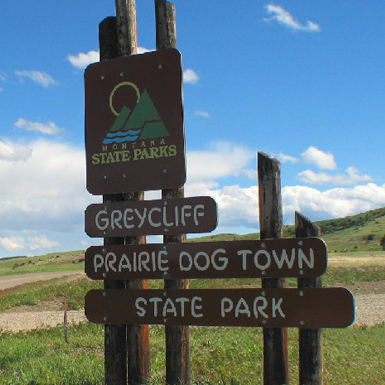 This 98-acre facility is operated by the Parks Division of Montana Fish, Wildlife & Parks to preserve the black-tailed prairie dog ecosystem for the public’s educational and viewing enjoyment. Protection of this prairie dog town is due to the efforts of Edward Boehm of Livingston, Montana, who spearheaded the efforts to save it as the Interstate Highway was being built. Cooperative efforts by the Nature Conservancy and the Montana Department of Highways also helped preserve the park. Interpretive displays and picnic tables are provided. A day-use fee is charged at the park entrance to support ongoing maintenance. Restrooms are available about 1 mile east. Camping facilities are located at the KOA about 1/4 mile west.

Five species of prairie dogs are native to North America. The black-tailed prairie dog (Cynomys ludovicianus), inhabits Greycliff Prairie Dog Town State Park and is the most common species. These ground-dwelling squirrels live on the plains from southern Canada to northern Mexico. Large prairie dog towns, or colonies, are further divided into coteries. One coterie (the family territory) is usually comprised of one adult male, three to five adult females and their offspring.

It is typical for black-tailed prairie dogs to dig 15-40 burrow entrances per acre, many more than other species. Each burrow usually has two entrances which lead to a tunnel 4-7 feet deep and perhaps 15-25 feet long. Look for tunnel entrances marked by mounds of excavated soil compacted into a crater of dome shape. Often two feet high, these mounds serve as good lookouts and prevent running water from entering the tunnels. Burrowing aerates and mixes soil types, as well as incorporating organic matter to enhance soil formation.

Black-tailed prairie dogs are usually sexually mature after their second winter and will breed in March each year. One to ten pups (average of 5) are born about 34 days after conception. The pups are born hairless and blind. They remain in the safety of their burrow for 48-49 days before emerging above ground. Prairie dogs are fully grown by October or November, averaging 1-3 pounds and 14-17 inches long. When late spring arrives, black-tailed prairie dogs may remain in the coterie in which they were born. If they cannot replace another member of the coterie who has left or died, the young prairie dog must leave. Young prairie dogs are most vulnerable during this time of dispersal. Watch for conflicts between males as the young attempt to join existing family territories or establish new coteries. If they survive their first two years of turmoil, prairie dogs may live five years or more.

Watch for a variety of postures or displays, such as lifting their heads or standing on their hind legs to scrutinize the terrain for signs of danger. Listen for at least 11 different calls used to communicate with each other. If a predator approaches, the prairie dog scampers to his burrow mound and sounds a series of short nasal yips to alert others. A jump-yip, or “whee-oo,” call is given as an “all clear” message when the danger has passed. Different calls and displays are used depending upon the relationship between caller and target (ie. resident vs. nonresident of the caller’s coterie). Coterie members engage in a greeting ceremony by touching teeth, followed by elaborate grooming. This display seems to encourage harmony among the family and helps to identify intruding prairie dogs.

Black-tailed prairie dogs and Mexican prairie dogs do not hibernate as do the three white-tailed species. You should easily spot a few prairie dogs during daylight hours. They may retreat to their burrow seeking relief from the summer’s midday heat or shelter from a winter storm. Prairie dogs can be seen eating green grasses, broad-leafed, non-woody plants (forbs), and digging for roots and bulbs. Seeds and insects add variety to their diet. They are adept at removing the spines from prickly-pear cactus before eating the leaves.

Coyotes, foxes, and bobcats may be seen stalking along the outer perimeters of prairie dog towns, or they may sit and wait at burrow entrances to make captures. Ferruginous hawks and golden eagles perch or soar near towns hunting prey. Look for enlarged burrow entrances, evidence of badgers who can dig deep into the burrows. Weasels have streamlined bodies allowing them to prowl through the tunnels. Keep an eye out for prairie rattlesnakes and bull snakes which occasionally use the tunnels for shelter and may dine on the young prairie dogs.

Can Prairie Dogs and Man Coexist

Black-tailed prairie dogs have long been viewed as a detriment to successful livestock production because they create dangerous holes and compete with livestock for grasses and forbs. In reality, prairie dogs have a variable effect on livestock production depending on habitat conditions and climate. In some areas, new plant growth is more nutritious and compensates for a loss of forage volume.

Black-tailed prairie dogs have been reduced by 80-90% in various. portions of their range. This reduction has had an impact on some species that use prairie dog towns. The most famous of these is the black-footed ferret which lives only in prairie dog towns and feeds almost exclusively (85-90%) on prairie dogs. The black-footed ferret is an endangered species, extinct in the wild except for one site in Wyoming. A recovery program is underway to restore this ferret to certain portions of its range. Over 101 vertebrate species inhabit the special ecosystem found near prairie dog towns, including the burrowing owl, golden eagle, ferruginous hawk, mountain plover, and swift fox.

Please Do Not Feed the Prairie Dogs

The digestive tracts of wild animals are specifically adapted to utilize their natural foods. Human foods, often with preservatives and chemicals, can compromise their ability to survive, especially during times of stress. Wild animals may ingest foil, plastic or paper wrappers which smell or taste like food. The results could be fatal.