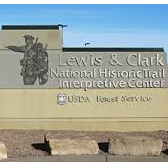 Centrally located along the 4,000-mile Lewis and Clark National Historic Trail, Great Falls is the heart of Montana country where Lewis and Clark and the rest of the Corps of Discovery camped more often and trekked more miles than any other trail state. Surrounded by the historic landscape, Interpretive Center visitors come to hike, fish, birdwatch, re-energize and re-live the Lewis and Clark adventure.

To see everything, plan a two-hour visit to the Interpretive Center. Spend your time in the theater with a feature film produced by Ken Burns, learn more at a costumed interpreter’s presentation, tour the exhibit hall, stroll the paved trails or experience the Missouri River shoreline with a visit to River Camp.

Imagine the untamed prairie, prickly pear poking underfoot, a smoke scent drifting on the wind, an eagle soaring silently overhead, and the rumbling roar of a waterfall pounding the stillness.

Awaken your senses by stepping back in time to the open prairie where antelope grazed amongst roaming herds of bison, and Meriwether Lewis and William Clark with a small party of devoted companions known as the Corps of Discovery explored the landscape in the early 19th century. Indians called this land home; explorers called it paradise. Lewis wrote of the countryside in 1805, “… I overlooked a most beatifull and extensive plain reaching from the river to the base of the snowclad mountains … I also observed the missoury stretching … through this plain to a great distance filled to it’s even and grassey brim …” The beauty of the prairie awaits those who visit the Lewis and Clark National Historic Trail Interpretive Center where the past meets the future. (Note: the spelling is just as it was in the journals)

Center exhibits feature the epic travels of Lewis and Clark through Indian Country, the West in 1805. Celebrate the successes, feel the frustrations.

“… I deturmined to examine & Survey the Portage find a leavel rout if possible- The 2 men despatched to examine the Portage gave an unfavourable account of the Countrey, reporting that the Creek & 2 deep reveens cut the Prarie in such a manner between the river and mountain as to render a portage in their oppinion for the Canoes impossible- we Selected 6 men to make wheels & to draw the Canoes on as the distance was probably too far for to be carried on the mens Shoulders…” [Clark, June 16th of Sunday 1805] (Spelling is just as it was in the journals)

The story unfolds in the 6,000 square-foot exhibit hall. Journey back to 1804 and follow the Corps of Discovery from their departure in St. Charles, Missouri, up the Missouri River, across the expansive plains, through the white cliffs, and over the treacherous snow-capped mountains to the Columbia River and their ultimate goal, the Pacific Ocean shores. Feel their labors and pain by gripping a rope and pulling your own canoe against the incessant current; gauge your daily towing capacity using the mile-o-meter. Try your hand at building the iron boat; enjoy the cottonwood fragrance as you ring the doorbells and enter the Mandan lodge; translate four foreign languages as you negotiate for horses, and scribe your name at Pompey’s Pillar.

With every step, meet the people who unselfishly embraced the explorers. Experience the Indian lifestyles so intriguing to the explorers, and witness the elaborate, often imperfect, the diplomacy of the exploring party. Experience the struggles and successes of these early explorers traveling across the continent through the American West.

Seasonally, interpretive programs move outdoors. Enjoy guided walks on summer mornings; keep an eye open for a pelican swooping for the catch of the day; watch the native plants surrounding the facility burst to flower, and listen for the songbirds calling for a mate.

In River Camp along the shores of the Missouri, try your hand at hide scraping, cooking over an open fire, or pitching a tipi - daily survival skills essential to the enterprise.

Less than two miles upstream of the Interpretive Center today lies Black Eagle Falls. “below this fall at a little distance a beatifull little Island well timbered is situated about the middle of the river. in this Island on a Cottonwood tree an Eagle has placed her nest …. the water is also broken in such manner as it descends over this pitch that the mist or sprey rises to a considerable hight.” [Lewis, Friday, June 14th, 1805]

During the school year, thousands of schoolchildren engage in special programs integrating science, English, history, anthropology, ecology, geology, and leadership into their classroom instruction. Reservations are required for school groups. Call ahead for openings.

Like the tribes and the exploring party, nothing stays static at the Interpretive Center. Changing temporary exhibits, on loan from other national facilities, complement the Center’s permanent collection.

The Center’s bookstore, the Portage Cache, offers innovative selections for the discerning buyer. For scholars, the Archives Library of the Lewis and Clark Trail Heritage Foundation boasts a superior assemblage of collectible books. Schedule a research visit with the librarian.

Return time and again to see a new interpretive program, a new exhibit, or new selection in the gift store.

Press releases, events calendars and links to other Lewis and Clark groups are posted on the Interpretive Center’s website: www.fs.fed.us/r1/lewisclark/lcic/