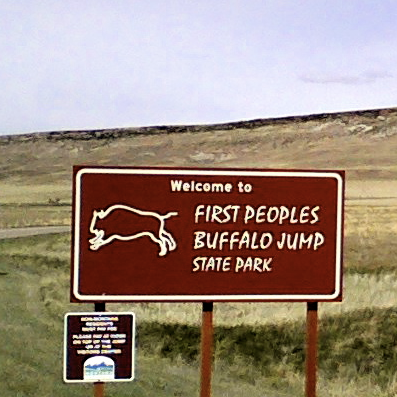 Location: 10 miles south of Great Falls on I-15 at Ulm Exit, then 6 miles northwest on county road.

For more than 1,000 years, prehistoric men and women of the Great Plains hunted bison by driving them over cliffs. One of the most spectacular yet least commercially developed “buffalo jumps” can be seen today at Ulm Pishkun State Park, a dozen miles west of Great Falls.

“Pishkun” comes from a Blackfeet word meaning “deep blood kettle.” With good reason. Certainly, dozens, probably hundreds, possibly thousands of buffalo at a time were driven over the cliff at Ulm Pishkun and slaughtered.

Recently, archaeologists from Montana State University researched and excavated the site. They found:

Ulm Pishkun is perhaps the largest buffalo jump in the world.

Human activity at the site dates back to at least A.D. 500.

Buffalo apparently were killed and processed throughout the year, not just fall or winter, as was previously believed.

To the nomadic people who inhabited the Great Plains for thousands of years, the buffalo meant survival: hides for clothing and shelter, bones for utensils, sinew for bow strings and meat to eat.

But the most efficient method for killing buffalo-the horse-didn’t appear on the plains until the early to mid-1700s. Faced with the enormous size, quickness, and toughness of the buffalo, these people used a readily available means: drive them over cliffs.