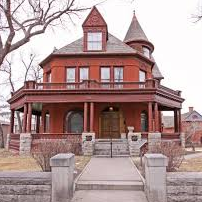 For over a century, the Original Governor’s Mansion has stood as a symbol of Helena’s wealth and political prominence. In 1888 entrepreneur William A. Chessman, built the home for his wife Penelope and their two children. After 1900, railroad contractor Peter Larson and his wife, Margaret resided in the house, followed in 1911 by Harfield and Kathryn Conrad of the influential Conrad family of Great Falls.

The State of Montana acquired the handsome brick mansion in 1913 to serve as the first official governor’s residence. For nearly half a century, Montana’s governors and their families lived here, beginning with Samuel V. Stewart and ending with J. Hugo Aronson.

Restoration of the building began in 1969 with the support of the City of Helena. Since 1981, the Montana Historical Society has administered the Mansion as an historic-house museum. Restoration has continued with the assistance of the Original Governor’s Mansion Restoration Board, a dedicated group of local citizen advocates. Guided tours of the Original Governor’s Mansion offer the opportunity to explore a part of Montana’s and Helena’s past.

The Original Governor’s Mansion has enjoyed both private and public roles in the history of Montana and its capital city. From 1888 until 1959, the Ewing Street residence served as home to three consecutive private owners, and a succession of nine “first” families. The history of the Mansion is as much a history of these people as it is of a building.

For the Chessman family, their new Queen Anne style house reflected William Chessman’s wealth and influence in the Helena community. Thanks to his success and the work of their servants, the Chessmans led the comfortable domestic life expected of the well-to-do Victorian family. Though financial difficulties forced the Chessmans to give up this lifestyle, the Larsons and the Conrads continued the pattern of affluence into the 1900s.

When the private home became the official governor’s residence in 1913, the occupant families represented Montana’s elite, again supported by a staff of servants. Politics were endured as an important element of domestic life. Governors relied primarily on state funding to run their household, and they used the residence as a family home, as well as to host important guests.

Since 1888 the residents of the Mansion have changed frequently. The Mansion itself has changed less than its occupants. The structure has remained intact, and the furnishings were updated only partially over the years. The appearance of the building today closely resembles the Mansion during its years of prominence.