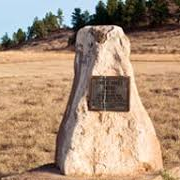 On June 17, 1876, 1300 soldiers, scouts, and miners were met in battle by an equal number of Sioux and Cheyenne. The hills and rocky outcroppings overlooking Rosebud Creek were the setting for one of the most intense battles ever waged between Indians, attempting to retain their cultural way of life, and the United States Army who were enforcing an edict from Washington.

In 1876, the various bands of Sioux and Cheyenne had combined for common defense creating a fighting force uncommonly large and aggressive for Plains Indians. Over 2,500 participants from both sides were involved in a titanic struggle, which lasted more than six hours and encompassed an area over ten square miles. The battle of the Rosebud symbolizes the Indians’ first stiff resistance in the Sioux War of 1876. Its outcome contributed to Lt Col. George A. Custer’s devastating defeat on the Little Bighorn a week later.

Causes of the Indian Wars

The 1868 treaty guaranteed the rights of Indians to ownership of lands, roughly the western half of South Dakota, eastern Montana and Wyoming. The U.S. Government promised protection “against the commission of all depredations by people of the United States.” Rights were forgotten or ignored with the discovery of gold in 1874. Soldiers were sent in to evict the miners but to no avail. Indians, disenchanted with reservation life, and angered over treaty violations joined the ranks of Sitting Bull and Crazy Horse who vowed never to relinquish their lands. The Commissioner of Indian Affairs in December 1875, ordered the Indians to return to the reservation by January 31, 1876, or face military action. When the ultimatum was ignored, soldiers were ordered to force them back to reservations.

Crook, with the largest force of the three columns departed Ft. Fetterman, Wyoming, May 29. He numbered over 1,000 men including 15 companies of the 2nd and 3rd Cavalry, and five companies of the 5th and 9th Infantry. On June 14, Crook reached present-day Sheridan. Here the column received reinforcements with the arrival of 276 Shoshone and Crow scouts. Acting on information, later to prove false, that an Indian village was on the Rosebud, Crook stripped his column to light marching order in an attempt to overtake the village. By the evening of the 16th, the army camped on the upper reaches of Rosebud Creek.

The Battle of the Rosebud

The next morning Crook moved down the Rosebud but halted around 8 a.m. after covering 5 miles. Men unsaddled their horses, officers congregated to chat or play a quick game of cards. Meanwhile, the Sioux, alerted the night before of Crook’s advance, raced from their village located on a tributary of the Little Bighorn some 30 miles distant to intercept Crook’s troops. An exact count of the number of warriors engaged is not known; estimates range from 700-1,500. Prominent in leading the Sioux contingent was the Oglala warrior Crazy Horse. Two Moon, Young Two Moon, and Spotted Wolf led the Cheyenne.

At 8:30 a.m. soldiers heard firing to the north. Most gave it little thought believing it to be the scouts hunting buffalo. But the shots grew in intensity and within minutes Crow and Shoshones could be seen charging down the hills towards the soldiers pursued by Sioux. The scouts halted and fought within 500 yards of the camp, buying Crook precious minutes to mount his defense.

Crook sent the 2nd Cavalry under Captain Henry B. Noyes with support from the foot soldiers to dismount and occupy the low hills immediately north of the camp while Captain Anson Mills’ battalion of the 3rd Cavalry mounted and charged the warriors on Noyes’ right .According to Mills:

We met the Indians at the foot of this ridge, and charged right in and through them, driving them back to the top of the ridge. These Indians were most hideous, every one being painted in most hideous colors and designs, stark naked, except their moccasins, breech clouts and head gear … the Indians proved then and there that they were the best cavalry soldier on earth. In charging up towards us they exposed little of their persons, hanging on with one arm around the neck and one leg over the horse, firing and lancing from underneath the horses’ necks, so that there was no part on the Indian at which we would aim.

To the left Colonel William B. Royall with the remaining four companies of the 3rd Cavalry pursued warriors who retreated before his advance. About one mile north of the creek, a high knoll commanded the valley of the Rosebud. Mills’ second charge cleared the hilltop, which Crook immediately seized as his command post.

For several hours, the battle ebbed and flowed. Indians retreated as soldiers advanced, then when the troops became scattered, the warriors would concentrate a superior force and drive them back. Another trooper commented: “They were in front, rear, flanks, and on every hilltop, far and near, I had been in several Indian battles, but never saw so many Indians at one time before … or so brave.”

By 11 a.m. Crook decided to force the issue. Still believing the Indian camp was nearby on the Rosebud, he ordered Mills to take eight companies of cavalry and strike the village. But Mills’ withdrawal prompted a general advance by the Indians who believed the soldiers were preparing to retreat. Concentrating on Crook’s left, they nearly overwhelmed Col. Royall’s detachment struggling to unite with Crook. The beleaguered battalion was extricated from disaster by the fortunate arrival of the infantry. Confronted by aggressive warriors and mounting casualties, Crook reluctantly recalled Mills. With Mills’ return, the Indians abandoned the battlefield.

Crook’s casualties were high for Indian fighting—10 dead, 21 wounded. With his supplies and ammunition running low, Crook buried his dead on the field and returned to his supply base at Sheridan.

For the Sioux and Cheyenne, their losses are unknown but considered similar. Bolstered by their stoppage of Crook, the Indians returned to their camp. The battle of the Rosebud was to be a prelude to their still greater victory eight days later at Little Bighorn.

The park is 3,052 acres and is at 4,445 feet in elevation. It is open all year long for day use only. Self guided tours are set up with interpretive signs.