The Continental Divide National Scenic Trail (CDNST) was established by Congress under the National Trails System Act of 1968. The trail will extend 3,100 miles, in its entirety, from Canada to Mexico.

This northernmost portion follows the backbone of the Rocky Mountains for 795 miles through Montana and Idaho. It passes through some of our nations most spectacular scenery-Glacier National Park, ten national forests with wildernesses such as the Bob Marshall and Anaconda Pintler, several Bureau of Land Management Resource Areas, State lands and short segments of private lands. 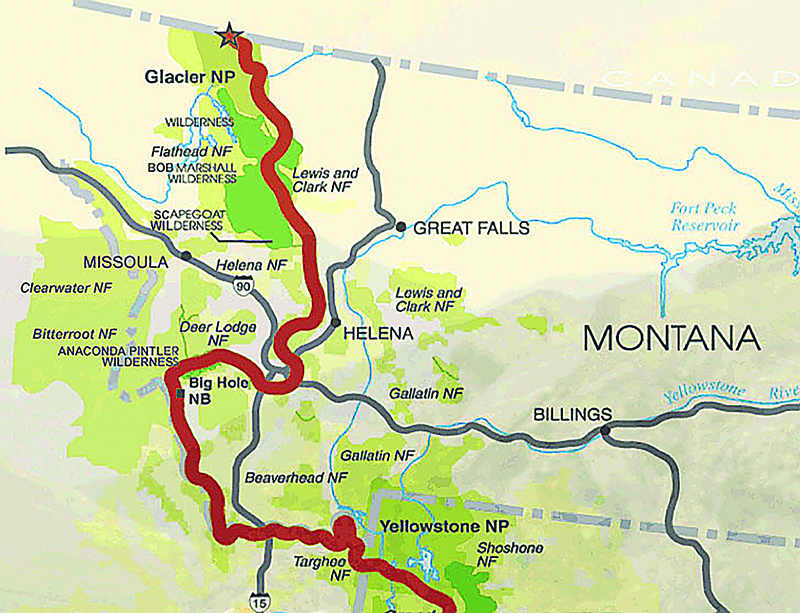 This segment begins at the United States/Canada border between Glacier and Waterton Lakes National Parks, following a route near the divide and through the Blackfeet Indian Reservation to Marias Pass. Southward the trail passes through the Bob Marshall and Scapegoat Wildernesses, skirting the Chinese Wall. After crossing Rogers and MacDonald Passes, it continues through historic mining districts and ghost towns. West of Anaconda the trail traverses the length of the Anaconda Pintler Wilderness, reaching the Montana-Idaho border near Lost Trail Pass on the 1805 route of Lewis and Clark.

Winding through the Bitterroot Range, the trail passes high above Big Hole National Battlefield, scene of conflict between the Nez Perce Tribe and the U.S. Army in 1877, and on to Lemhi Pass, headwaters of the Missouri River and marked by the Sacajawea Memorial. Continuing on through the Bitterroots, it crosses Monida Pass and winds along the crest of the Centennial Mountains above Red Rock Lakes National Wildlife Refuge. Staying near the divide, the trail crosses Raynolds and Targhee Passes with views of Henrys Lake to the south and Hebgen Lake to the north, before continuing on to the end of this segment of the CDNST, at the western boundary of Yellowstone National Park.

Elevations along the trail through Montana and Idaho vary from 4,200 feet at Waterton Lake to approximately 10,000 feet at Red Conglomerate Peaks in the Bitterroot Range. Over 90 percent of the trail is within 5 miles of the Continental Divide, and much is on the divide itself; the furthest that it deviates from the divide is 8 miles. Annual precipitation varies from 120 inches in Glacier National Park to only 20 inches near Rogers Pass. Because much comes as snow, portions of the trail are passable only in July, August, and September. Temperatures often drop below freezing, and snowstorms can occur even during the summer

Travel on the Continental Divide National Scenic Trail can be a long-remembered adventure. Following are a few tips to help ensure a happy and safe trip. Travelers are urged to contact local Forest Service Ranger Stations for specific information.

Interim Routes: About 50 of the 795 miles of this northern portion of the trail do not currently exist as a constructed trail or primitive road. Temporary interim routes serve as detours, pending construction of the preferred route. A special interim route exists in Glacier National Park. Because there are no Canadian Customs officials at Waterton Lake, an interim route for the trail begins at Chief Mountain Customs Station on Montana State Highway 17.

Modes Of Travel: While the National Trails System Act intended the trail be established primarily for hiking and horseback use, motorized uses are permitted where previously established. Of the total 795 miles of road and trail, 322 miles permit some type of summertime motorized use. Primitive roads serve as the trail route for 160 miles. Most of the route is lightly used and visitors can expect considerable solitude.

Wilderness: travel and camping permits are not required, but some restrictions may apply, including party size limits; motorized transport and bicycles are prohibited.

U.S. Sheep Experiment Station: the trail crosses this station two places in the Centennial Mountains. Contact the station for restrictions. Stock use: contact agencies managing the trail for restrictions on grazing, feeding and tying stock.

Resupply: There are 34 points on or near roads along this segment of the trail where travelers could prearrange for resupplies of food and equipment. Though land management agencies cannot provide this service, they can help you identify those points.

Travelers are responsible for recognizing the risks inherent in backcountry travel and taking appropriate precautions. Here are some things to consider:

Bears: all of the CDNST in Montana and Idaho is in occupied black bear habitat, and much is also frequented by grizzly bears. To prevent bear-human conflicts, special practices need to be followed in food storage, cooking, and disposal of wastes; overnight camping may be prohibited in places.

Terrain, weather: the trail passes through remote and rugged terrain. Travelers may encounter a variety of dangerous conditions and face the inherent risks of inclement weather, lightning, isolation, physical hazards, and minimal communications.

Water: water in springs, streams, and lakes should not be considered safe to drink without proper treatment.

Mixed uses: use caution where the trail crosses roads or highways, or where motorized use is allowed

Be Considerate: Five miles of the trail lie within the Blackfeet Indian Reservation, and other short sections cross private lands. Please respect these lands and observe special restrictions to ensure they will remain open to travelers in the future. Visitors can expect to observe various management activities, such as logging, mining, and grazing on both public and private land along the trail. Agency land management plans and the comprehensive plan for the trail provide for these activities.

Respect those who will follow your footsteps. Leave no trace of your visit. Reprinted from National Forest Service pamphlet.